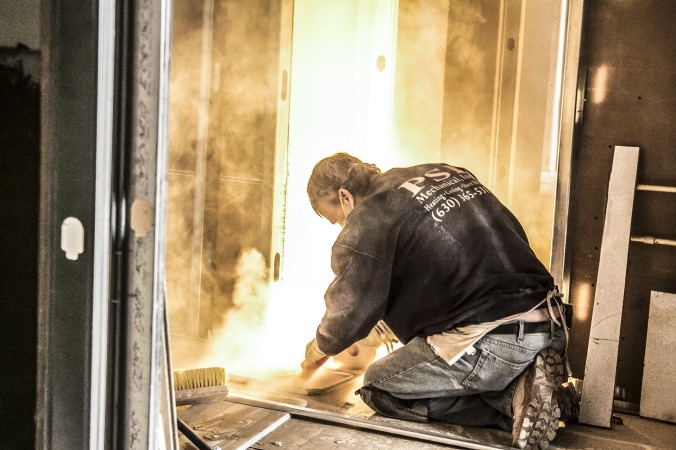 I hate being reminded of my roots.

I had jury duty today in my trial practice class, and I was actually looking forward to it, because it was a breach of contract case concerning construction. Finally! Something related to my interests! I have taken architectural drafting and design. I was at the top of my class. My grandfather was a carpenter and my father is a facilities engineer. This is in my blood. I love making things. I like drafting. I know what they’re talking about when they’re talking about building structures. This is math and engineering. I get this!

But not once during the trial did either side actually show us the blueprints. I drew them for myself, based on what went on at trial, and I knew, based on what was said, that the plaintiff did not present sound and complete plans to the defendant.

And by the time we went into jury deliberations, no one cared about the actual facts. We finally got a copy of the actual blueprints, and they were amateur. The fact was that the contractor who drew up the blue prints had no idea how to draft correctly so his blueprints should not have been taken seriously. First: the walls in his blueprint had absolutely no support structure, even though by the time he met with the defendant, his frame was up.. Loadbearing or not, you simply cannot put up a wall that is nothing more that two layers of gypsum plasterboard sandwiches 6 inches of insulation. The wall will not stand, and your ceilings will collapse.  Duh.

Granted, class was running late and everyone wanted to leave and drink their sorrows away, but I didn’t think that was fair. After all, I had to sit through the same three hours of trial that they did and I felt it was only fair that I also get a say, although I am obviously the only one who has any background on the actual facts.

And two hours later, I am still annoyed at this. I can have an annoyance flare up at the drop of a hat.

The thing is, I am very good at putting little pieces together to create a whole. I understand objects, processes, and methods. I also believe that the physical world is still important even if I am in law school.

I took the ASVAB when I was 19 and thought I wanted to go into the military. I scored a 97 out of 99; I had a perfect score on the spatial tests. They wanted to put me in engineering. It was the first time I ever thought of something like that. Sure: I came from that background, but I also was into writing and art at the time. Of course, there was no MOS for artists per se in the Marines. It would be another ten years before I would consider engineering to be of interest to me.

I am McGuyver in my own life. I fix things all the time. Even though I have lived in apartments most of my adult life, I fix my own stuff. First, there is no telling who the hell they will send to your house. Second, you will be overcharged. Third, I can do it quickly myself. Fourth, I like the challenge of fixing my own HVAC system. Of course, I am still getting used to the idea that not everyone handles physical reality the same way I do.

My boyfriend likes to wax the floor. Unfortunately, he doesn’t clean the floor well enough before he waxes it, so before we move, I have to figure out how to sand down all the wax and lift all the stains now sealed into the floor.

I made my own kimchi when I was in Korea and I made it in the dead of winter. The ondol flooring was perfect for this: soak your cabbage in salt water, leave it on the floor, and let the floor warm it up. Then, make the kimchi and put it in your laundry room where the temperature is always about 50 degrees. I also used to make my own yogurt. The easiest thing to do is to cook the yogurt, wrap the pot in all your blankets, coats, and sweaters, and put it in the washing machine and leave it there to incubation. Perfection each time.

The ends justify the means. How is this weird?

There is nothing I cannot make or fix if I can find the tools or time, and even if I had a lot of money, I would still do this because there is nothing that makes me feel more focused and worthwhile than working with my hands.

Unfortunately, I don’t get to do this much anymore. I used to cook all my food, bake my own bread, even make my own cosmetics. I used to mend all my clothes. Now, I’m lucky if I get a chance to make anything by scratch. I haven’t touched a pottery wheel in four years, and how I miss it!

Which reminds me that I have to make pizza dough tonight, because there is not a single restaurant in Chicago that knows how to make a proper pizza, let alone a proper New York pizza, so once again: I have to do this myself.

5 thoughts on “I am Mars in Virgo: Narrative 3”